There have been many Jack the Ripper suspects and theories over the years; however the most shocking one has to be the theory of the famous painter Van Gogh. Vincent Van Gogh was born in 1853, making him 35 when the Ripper killings started.

It was thought that Van Gogh would be an ideal suspect due to his age and it was later found that his handwriting matched that of Jack the Ripper’s, increasing the suspicion that he could be the murderer the police are still looking for.

Though the handwriting appeared a pretty big give away, one of the two biggest pieces of alleged evidence is Van Gogh’s painting ‘Irises’ which is said to hide the face of one of Jack the Ripper’s victims, Mary Kelly.

It is said that the hidden face resembles the actual mutilated face of Mary Kelly and sits exactly how she was found on her deathbed. The nose has been represented with just a black shape which could be said to resemble a skeletal cavity as the Ripper had cut off her nose.

This face is imbedded and blended into the rest of the picture, so was it purposely created to leave a trail? Is he Jack the Ripper, was it mere coincidence or was it pure inspiration that drove Van Gogh to paint this disturbing image?

Another possible coincidence is that Van Gogh was rumoured to have moved from Holland to London at the age of 20. A few months later, the body parts of a woman were found in the River Thames however this was not anything to do with the Ripper case nor is it clear that Vincent was the killer.

This was said to be a subtle clue due to the coincidence of the timing of the deaths and Vincent’s move as well as the fact that if Van Gogh was an avid killer before the Ripper murders began, it would make him a far more suitable candidate for a Ripper suspect. 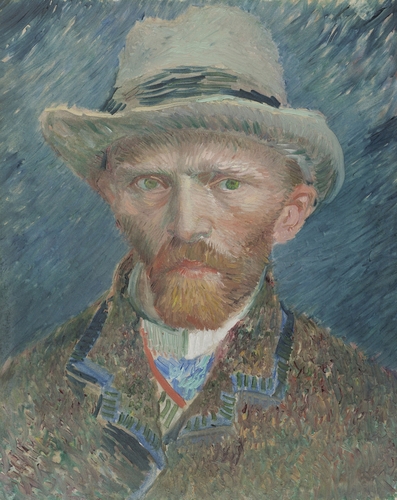 The second biggest piece of alleged evidence is the time gap between the Ripper letters sent to Metropolitan police which matches the time spent in hospital when Van Gogh cut off his own ear. Vincent cut off his ear on the night of December 23rd and was admitted to the hospital the following morning, where he remained in recovery until his release on January 7th. That 16 day gap matches the longest gap of the Ripper letters, which is 16 days throughout these exact dates.

So, was Van Gogh the real Jack the Ripper and unable to post his letters due to his dramatic trauma or was this as well just purely chance related.

Though the identity of Jack the Ripper still remains a mystery, join us on a Jack the Ripper tour where we will show you every little inkling involving the case. Tag along on our Jack the Ripper walk and uncover a case that was never before shown to the general public.