Below is a brief history that we have put together for those who aren't as familiar with the Jack the Ripper story.

In the early hours of Friday morning, on the 31st August 1888, a penniless prostitute was slaughtered in Bucks Row, Whitechapel. Her name was Mary Ann Nichols. Her throat was severed deeply by two cuts but it wasn't until her body was taken to the mortuary that it was discovered that the lower part of her abdomen was partly ripped open by a deep, jagged wound.

With the death of this one woman began a reign of terror so horrifying that the world still remembers it today. It conjures up images of a bygone time of gaslit streets, fog-ridden alleys and a hunt for a demon whose legend still lingers around the East End today... JACK THE RIPPER.

Just eight days later he struck again, this time in the back yard of 29 Hanbury Street. The victim's name was Annie Chapman, her mutilated body was discovered at about 6am. As in the case of Mary Ann Nichols, the throat was severed by two cuts. Furthermore, her abdomen was slashed entirely open and the entrails taken out and left on the shoulder of the corpse - it was also later discovered that the uterus had been removed.

Panic gripped the East End of London, newspapers told of the ghastly murders and people started to live in fear. Who was this deranged maniac? When would he strike again? What drove his blood thirst rage? 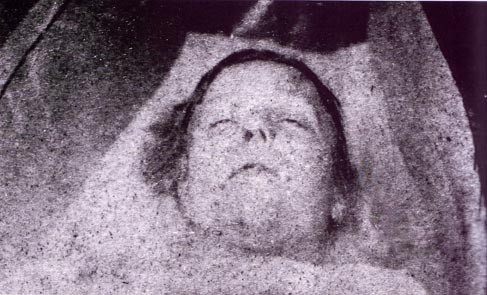 On the 27th September the killer was given a name; a letter received by the Central News Agency boasted of the killings and warned more were soon to follow; the letter was signed 'JACK THE RIPPER'. Now London had a name to go with the murders, like something out of a horror movie and pretty soon, whispers of his name drew fear around the streets and taverns of Whitechapel.

The letter proved to be chillingly accurate and within three days of the Central News receiving it, the Ripper struck again... September 30th, 1888 became known as the 'double event', when the Ripper struck - not once but twice, in the same night. The first victim was a prostitute named Elizabeth Stride, her body was discovered at about 1am in Dutfield's Yard, off Berner Street in Whitechapel. The cause of death was one clear-cut incision which severed the main artery on the left side of the neck. Her clothes were pushed up but no mutilations had occured. It would appear the Ripper had been almost caught in the act and had fled into the night. However, his blood lust still raged on. 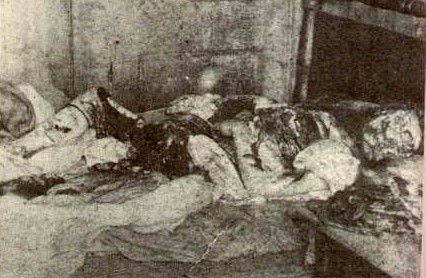 An hour later, less than a mile away in Mitre Square, police patrolman PC Edward Watkins entered Mitre Square on his usual beat; he had patrolled the square 15 mins beforehand and all had been well. However, on his return he discovered the body of Catherine Eddowes, lying on her back in the corner of the square. Her throat was severed and her abdomen savagely ripped open by a long, deep, jagged wound. The intestines had been cut out and now lay beside the dead woman, her face slashed and sliced. The left kidney and the major part of the uterus had been removed. Later, one officer described the scene "like she'd been ripped up like a pig in the market."

The killer left a clue nearby, part of Eddowes' apron was found in a doorway of Goulston Street and written in chalk above were the words: "the Juwes are the men that will not be blamed for nothing". What followed has had researchers puzzled for over a century; the Commissioner of the Metropolitan Police, Sir Charles Warren, ordered the message rubbed out even though it would only take a few hours for enough daylight to photograph the wall. So adamant that the writing be removed, he came all the way down to the East End and rubbed it out himself. Later, he voiced his concern that the message would start anti-semitic riots in London but his actions have led to accusations of a cover-up. Did Sir Charles destroy a harmless piece of graffiti unrelated to the crimes, or a genuine clue left by Jack the Ripper? Battered by a storm of criticism, Sir Charles resigned shortly afterwards.

A large team of policemen conducted house-to-house inquiries throughout Whitechapel. Forensic material was collected and examined. Suspects were identified, traced and either examined more closely or eliminated from the inquiry. Over 2000 people were interviewed, "upwards of 300" people were investigated, and 80 people were detained.

Volunteer citizens in London's East End known as the Whitechapel Vigilance Committee patrolled the streets looking for suspicious characters. They petitioned the government to raise a reward for information about the killer, and hired private detectives to question witnesses independently.

Its chairman, Mr George Lusk, received a parcel, inside was a handwritten letter and half a human kidney. The letter read as follows:

Mr Lusk,
Sir
I send you half the Kidney I took from one women prasarved it for you tother piece I fried and ate it was very nise. I may send you the bloody knif that took it out if you only wate a whil longer
signed
Catch me when you can Mister Lusk"

October passed by peacefully and some breathed a sigh of relief hoping the Ripper had ceased his killing spree.

The relief was short lived.

November 9th 1888 saw the bloodiest of all the Ripper's crimes.

A young Irish prostitute by the name of Mary Jane Kelly was found, in her own lodgings, lying on her bed. Her mutilations were the most horrific inflicted on any of the victims so far.

The existing photograph really doesn't show the sheer horror that must have been etched into all of the police officer's memories upon seeing such a sight.

Somebody was later quoted as saying "It appeared to be the work of a devil".

With Kelly's death, Jack the Ripper's reign of terror ended as quickly as it had first began.

For over 100 years following the events, writers and armchair detectives have struggled to finally put a name to the Whitechapel murderer. With each new year, another new suspect gets thrown into the mix.

A failed barrister, a Polish Jew, a mad Doctor, a Royal Prince, even a Jill - the Ripper has been but a few of the ongoing suspects emerging in a never-ending game of hunt the Ripper.

One thing seems certain though, whether Jack the Ripper was a Doctor, butcher, slaughterman or barrister, his identity will remain forever hidden in the shadows of the Victorian night.