Jack the Ripper – Everything You Need to Know

Imagine stepping into the dark Victorian underworld of years gone by. The thick fog clouds your vision as you make your way tentatively across the damp and dirty cobblestone street. Shadows dance in and out of your peripheral vision, inciting panicked hallucinations of eager hands looking to snatch you away into the darkness of the night.

Safely, you make it to where you want to be, ambling slowly towards your front door. Reaching up to gain access when, suddenly, a scream pierces the thick night air behind you. The shrill cry is cut menacingly short as you turn towards the noise. Hurrying in the direction of the cry for help, you arrive with a few other passersby, each one a face of terror in the dim gas lights.

As you peer down at the floor, you are horrified to see a victim laying bleeding. Her chest is still, her face frozen in a picture of fear. Is that the distant echo of fleeing footsteps you hear softly from a nearby alleyway, or simply a nearby policeman hurriedly running towards you?

Transport yourself back to a time when Jack the Ripper prowled the streets, slipping past the noses of keen policemen and prematurely ending the lives of innocent women.

Below, we delve into the details of that fateful era while providing relevant information on who the victims were, who chased the killer down, what sort of clues did they leave and more…. Read on, if you dare!

Between 1888 to 1891, the streets of Whitechapel played host to a series of gruesome murders. A proposed eleven victims were murdered - it is suspected many by the hand of Jack the Ripper himself.

Could all this death truly have been the work of just one man, or were there copycats? The former Chief Constable of the Metropolitan Police certainly didn't think so. In 1894, Melville Macnaghten wrote a private memo that stated: “the Whitechapel murderer had five victims and five victims only”.

The links that confirm these unfortunate women as the Canonical Five in the minds of London’s finest were the following:

Whether you believe the Canonical Five were Jack the Ripper's only victims or not, the murderer's choice of victims led to many theories around his identity - some of which you can find out about below. 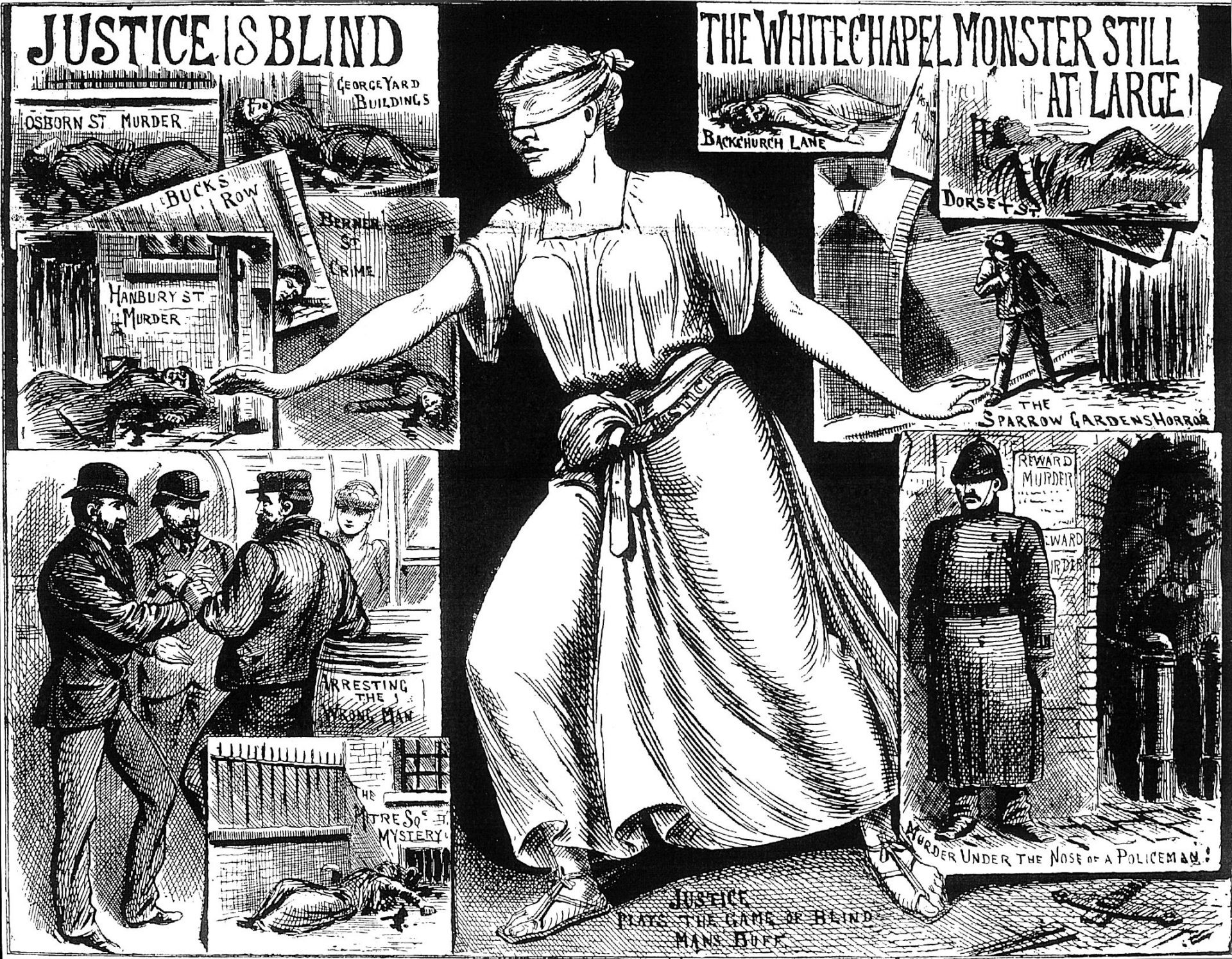 What began as a series of murders gaining the attention of the local police force quickly ballooned into an urgent manhunt, spanning multiple departments and attracting the attention of more than half a dozen senior detectives. In addition to the Metropolitan Police, Scotland Yard became involved, as well as the police force of the “square mile,” aka the City of London.

The convergence of this many minds did not result in complacency, and soon leads were located, threads untangled, and facts were dutifully and doggedly hunted down and followed up.

However, things were not as simple as they might seem, and the police were soon to face many dark days...

A single scrap of blood-soaked clothing that belonged to one of the victims found in the East End. A piece of anti-Semitic graffiti scrawled on the wall beside one of the bodies. With forensic investigations still very much in their infancy, this was the vast majority of the physical evidence that the “bobbies-on-the-beat” had to go on.

But what did these few-and-far-between clues lead detectives to uncover about the Ripper?

Accompanying a horrifying package containing an alleged slice of human kidney was a letter addressed to the head of the civilian volunteer force that had sprung up in the Ripper’s wake. The address line at the top read “From Hell”. Other letters followed, claiming to have been penned by “Saucy Jack”, and it was these writings that first gave us the name Jack the Ripper.

This evidence has been picked apart by everyone from nineteenth-century detectives to twenty-first-century novelists. Disagreements rage as to whether these are genuine gloats from a wordsmith with bloody fingers, or if this was just another attention-seeking aficionado of the popular papers.

Could the killer have been a Russian doctor? A medical background might have been necessary to target specific organs.

Could it have been an Oxford-educated barrister and teacher? A man whose family were described as “[having] little doubt, his own family felt him to have been the murderer”.

Could Jack the Ripper have been a man who was admitted to hospital for delusional episodes, possibly brought on by syphilis? A man who, while incarcerated at Lambeth hospital, repeatedly threatened hospital nurses with a knife?

These are profiles of just a few of the potential Jack the Ripper suspects. However, the investigation didn’t stop in the 1880s or the 1890s - in fact, it's still ongoing today!

Without a definitive answer to the classic question of whodunnit, speculation has abounded. Ripperologists, filmmakers, novelists, dramatists, armchair experts, and more have looked further and further outside the box in an attempt to track down Jack.

These ideas have certainly been varied. The creator of Wonderland, Lewis Carrol, has been branded a suspect, largely thanks to suggestions that if you anagram portions of his books, elaborate confessions emerge. Alternatively, perhaps could it be that the Ripper is the painter Walter Sickert, who went so far with the pride of not being caught that he even had the audacity to paint clues into his work?

Perhaps the serial killer H.H.Holmes took a transatlantic jaunt to stalk the streets of London. Or maybe it was a right royal cover-up, with Catholic shopkeepers, Freemasons, and even Prime Minister Lord Salisbury keeping the private predilections of Prince Albert Victor’s syphilitic mind under wraps.

Theories may diverge, disagree, and sometimes dive off the deep end, but speculation might just lead us to the killer...

Physical evidence beyond the bodies themselves might have been in short supply, but the victim's professions and their wounds paint a pattern of the potential type of suspect involved.

One author, Elliot Layton, proposed that the killer may have been deceptively pleasant, charming and suave. Arguing that serial killing is a social phenomenon, Layton took examples like Ted Bundy and Peter Sutcliffe as means of showing that the Ripper would have most likely gained the trust of his victims before carrying out his horrific crimes.

In the 1980s, two FBI special agents, John Douglas and Roy Hazelwood, suggested that it was more likely the killer was a loner, someone who had difficulty relating to others. Employed in a solitary job with little people skills, he would have likely been perceived as a little odd to those around him.

Step into the mind of the Ripper and find out more below.

Whitechapel was a single district of a city that had become the largest and most populous in the world. Rapid industrialisation had bought prosperity, power, and most of all people, to London in their droves. While many of these new arrivals believed the streets were paved with gold, sadly, the reality was much worse.

However, for women, there was one job that always had positions open - the oldest profession of all. During the Ripper’s reign of terror, it was estimated that there were 1,200 women this way engaged. Most lived in what were called “doss houses”, hostels with a fourpence nightly rate.

The only other businesses that made a decent turnover during this time were the public houses. Names like the Ten Bells, the Britannia, and the Frying Pan have now gone down in history as being inexplicably linked with Jack the Ripper.

Office blocks, car parks, and many other aspects of modern life have now claimed the streets that were once the sites of the victim’s death throws. Yet some still stand, and with the right angles, lighting, and time of day, you can still spy some of the same shadows that the Ripper would have stalked through as he made his escape.

Are you ready to catch a killer? Jack the Ripper has been ‘on the lose’ for the past 130 years. If we don’t know who he is now, are we ever going to find out?

Come and attempt to solve the mystery yourself on our Jack the Ripper London walking tour, London’s favourite Jack the Ripper tour with the exclusive Ripper-Vision experience! Walk the streets Jack used to wander and see the spots where his victims were cruelly tossed aside. Make sure to keep your eyes and ears open! A key detail might have been missed all those years ago - a key that holds the clue to discovering the true identity of the elusive, infamous Jack the Ripper!