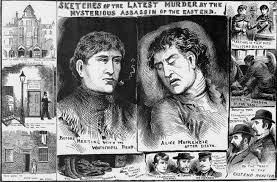 Just before 1.00 am on the wet morning of 17 July 1889, PC Walter Andrews found the dead body of 40-year-old Alice MacKenzie in Castle Alley, a dingy narrow passageway which ran from Whitechapel High Street to Wentworth Street. The cause of death was later discovered to be a severance of the carotid artery, the result of two cuts in the neck, and there were also a number of superficial stabs and cuts to the lower abdomen. This murder was interesting in that the injuries were inflicted upon the same areas of the body associated with the crimes of ‘Jack the Ripper’ and as a result, a number of officials were of the belief that the Whitechapel murderer had struck again. Although Dr George Bagster Phillips believed that a certain degree of anatomical knowledge was possessed by the killer, he did not think that the Ripper had committed this particular crime. Dr Thomas Bond, on the other hand, stated rather categorically:

“I see in this murder evidence of a similar design to the former Whitechapel murders, viz. sudden onslaught on the prostrate woman, the throat skillfully and resolutely cut with subsequent mutilation, each mutilation indicating sexual thoughts and a desire to mutilate the abdomen and sexual organs. I am of opinion that the murder was performed by the same person who committed the former series of Whitechapel murder.”

This opinion was also one taken by Chief Commissioner James Monro, who felt that the murderer of Alice MacKenzie was “identical with the notorious Jack the Ripper of last year.”

MacKenzie, known as ‘Claypipe Alice’ owing to her pipe-smoking habit, was certainly from the same category of victims as the previous ones: a resident for many years of a lodging house in Gun Street, Spitalfields, she had managed to hold down a regular relationship with John McCormack, and although she was deemed to be an industrious woman who worked as a charwoman, she was known to work the streets on occasion, leading police to consider her a common prostitute. The scene of the crime, Castle Alley; a narrow secluded thoroughfare with a mean reputation, was perfect for the Ripper to commit the crime. And as with previous killings, great risk of capture was ever present: PC Andrews, who found her body, had passed the same spot less than thirty minutes previously and just prior to that, PC Joseph Allen actually stood there having a snack. Close by on Wentworth Street was a police sergeant and of course, a number of residents in the properties close by. Interestingly, Sarah Smith, deputy of the adjacent Wash House, who was reading by candlelight in bed by a window that overlooked the alley, claimed to have heard nothing unusual that night until the sounding of PC Andrews’ whistle on discovering the body.

The police obviously took this murder seriously, despite the differences of opinion as to who was the perpetrator and as a result, Chief Commissioner Monro drafted in 42 extra officers into the area. There had also been some press reports stating that just prior to the incident, a letter had been received by police from ‘Jack the Ripper’, in which the writer said that he was “about to resume his work.”

Was Alice MacKenzie a true victim of Jack the Ripper? I guess we will never know, but this murder certainly bears enough resemblance to those committed the previous year to be considered as yet another atrocity from the Whitechapel Murderer.