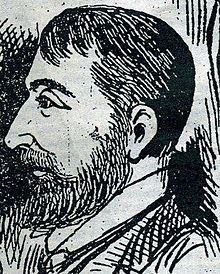 Edmund was the son of a Railway Clerk and when his family turned to the beer industry to find work, we find Edmund being a grocer’s delivery boy. In fact, he delivered sugar for a certain Mr R. White’s lemonade, a brand name we still recognise today. When Edmund married, he was working on the boats going from London to Margate. However, with a wife who was pregnant with his first child, he decided to change roles and join the Metropolitan Police force. Although he was shorter than the height you had to be to join the force, his time spent on the boats meant he was a strong, able-bodied person so the police dismissed the height problem.

Reid was given the warrant number of 56100 and started this career as a police constable, working on traffic duty in the area of Elephant and Castle. By 1875, he had become a detective of P Division and in the February of 1880, he became a detective working in A Division.

By 1884, Edmund had worked on various cases of stealing and even one on bigamy. He had become a father to his second child and had some success in his hobby of ballooning, but he was also becoming well known to the public. He was even the inspiration behind the Isle of Man author, Charles Gibbon’s, character of "Detective Dier". Two years later, Edmund became the Local Inspector of J Division, where he arrested the poisoner John Reynolds, who had tried to poison his wife with Bluestone.

On 1st August 1887, Edmund became an Inspector of H Division, Whitechapel. Taking over the role from Inspector Abberline, he was in that role when the set of murders attributed to a serial killer eventually known as Jack the Ripper first started.

Elizabeth Stride’s murder has also been suggested as being part of the Jack the Ripper investigation. Edmund was quite active in this murder case as he went to the murder scene at Berner Street, travelled to the local Coroner’s home to pass on information about the murder, travelled back to the murder scene once there was more light and went to the mortuary and wrote a detailed description of the woman. He also went to her inquest and questioned witnesses, while being able to dismiss that the woman was a suggested ‘Mrs Malcolm’.

Edmund was not involved in the investigation of Catherine Eddowes, another passing that has been added to the suggested Jack the Ripper case, as her murder happened within the boundary of the City of London Police, not the Metropolitan Police.

Edmund went to the murder scene of a suggested Jack the Ripper victim at Millers Court. This murder was generally accepted as belonging to a young woman called Mary Jane Kelly; he also went to her inquest. Edmund was also at the murder scene of Alice McKenzie in July 1889 and he went to her inquest too. However, with the murder of Frances Coles, he also made house-to-house searches of the area and even visited the local hospitals to see if the woman could be identified from an old wound she had to her head.

Edmund left the police force in February 1896 and moved to the seaside town of Herne Bay where he made his presence known in more ways than one. He continued his ballooning hobby, decorated his garden with cannon balls and flagpoles and constantly wrote to the council with a whole range of ideas. He passed away in this town on 5th December 1917.