Perhaps one of the most notorious events to happen during the Whitechapel murders relates to a letter received by George Lusk on 16 October 1888. Lusk was chairman of the Mile End Vigilance Committee, a group of local businessmen who had joined together to ‘assist’ in the hunt for the Ripper and also to lobby for the offer of rewards for his capture. He was a painter and decorator living in Tollet Street, Mile End and as a result of his group’s occasional approaches to the press, his address was known. For a while after the ‘double event,’ he had been aware of a man lurking around his home on various nights and had approached the police for protection.

On the evening of 16 October, he received a parcel containing what appeared to be half a kidney, accompanied by a letter, written in a semi-literate and untidy fashion. It read: 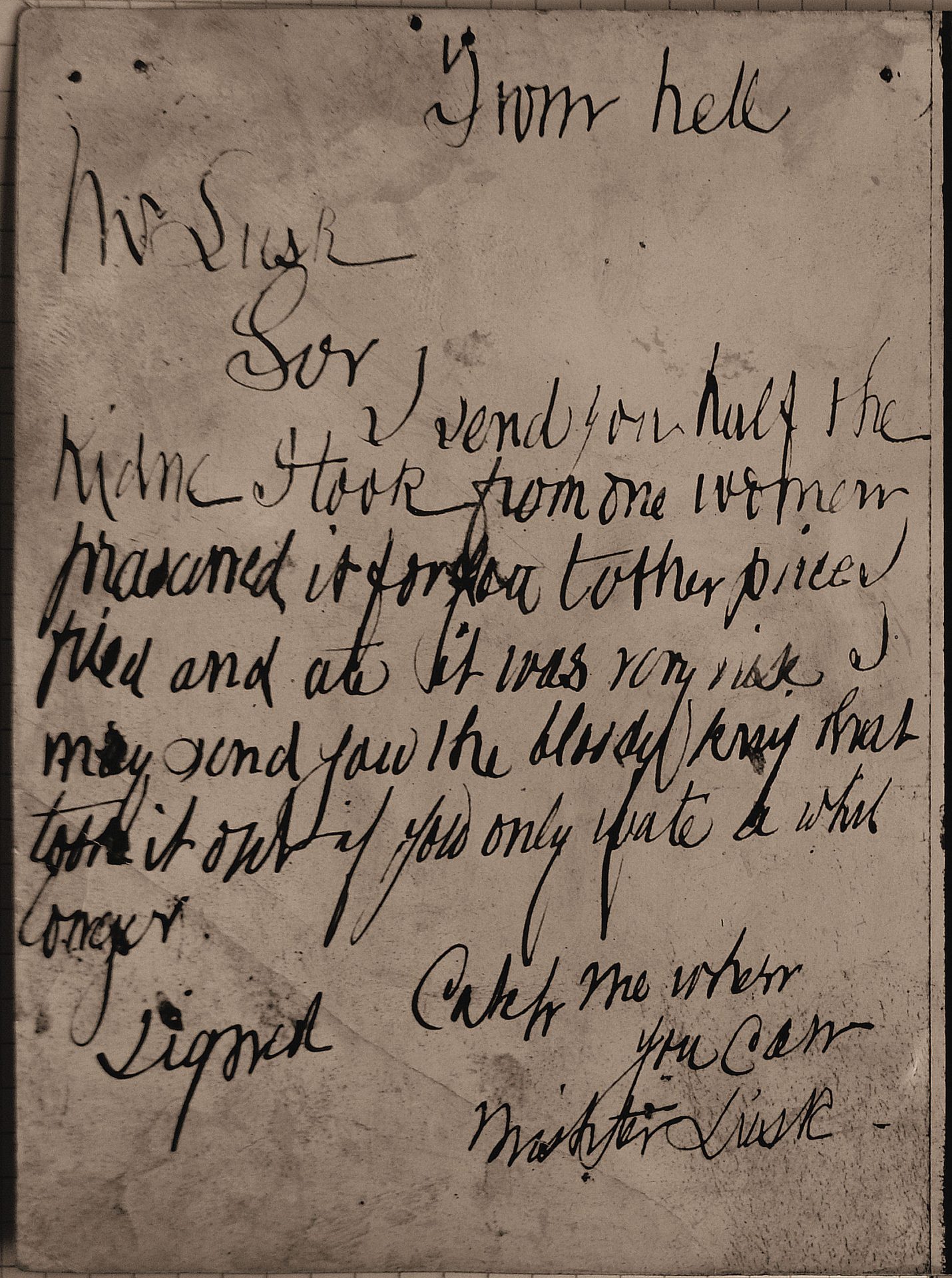 I send you half the Kidne I took from one woman and prasarved it for you tother piece I fried and ate it was very nise. I may send you the bloody knif that took it out if you only wate a whil longer

signed Catch me when you can Mishter Lusk

Lusk immediately felt the whole thing was a hoax, and after putting the parcel in his desk drawer for a day, showed it, and its contents, to members of the committee. It was taken to the surgery of Dr Frederick Wiles on Mile End Road and examined by Dr F. S. Reed in his absence. It was then taken to Dr Thomas Openshaw at the London Hospital who concluded that it was half of a left human kidney and little more. Unfortunately, misleading comments were made by F. S. Reed to the press, who stated that Openshaw had claimed it was the kidney of a woman about 45 years of age “and that it had been taken from the body within the last three weeks.” Openshaw would later refute this; “He couldn't say, however, whether it was that of a woman, nor how long ago it had been removed from the body, as it had been preserved in spirits.”

The urge to link the organ with the one taken from Catherine Eddowes a few weeks before was inevitable, and led to much contradiction from the experts. City Police surgeon Frederick Gordon Browne believed that “that only a small portion of the renal artery adheres to the kidney, while in the case of the Mitre-square victim a large portion of this artery adhered to the body”, suggesting he was pointing to the organ as being genuinely from the victim. Others, such as William Sedgwick Saunders, were happy to label it all as “a student's antic. It is quite possible for any student to obtain a kidney for the purpose.”

So was the ‘Lusk Kidney’, as it has become known, genuine? It seems we will never know, as there has been no definitive evidence from the time to prove it. If any official reports were set down by City Police surgeons such as Gordon Browne, they have yet to be traced, and likely never will be, as most of the City Police documents on the Ripper case were lost to wartime bombing. The portion of kidney was presumed to have been disposed of long ago; there have been stories that it was kept by the London Hospital and disposed of in the 1950s, as well as the possibility that it was kept in the Public Record Office until as late as the 1980s, but either of these rumours have been substantiated.

As for the infamous letter, it was photographed by the City Police in October 1888 and has officially been missing ever since, although several original copies of the photograph survive, one of which is kept at the London Hospital Museum. The writing, obviously different from the ‘Dear Boss’ letter and ‘Saucy Jacky’ postcard, point to a separate author. Although we will never know if the kidney was genuinely Catherine Eddowes’, if it was, then here, on this now notorious communication, we have the writing of Jack the Ripper himself, although ironically, it was not signed with that name.