On 27th September 1888, as fear of the uncaught killer reached fever pitch, the Central News Agency, a press agency based in Blackfriars in London, received a small envelope addressed to ‘The Boss, Central News, London City’ containing a letter written in red ink. It soon became apparent that the author of the letter was claiming responsibility for the murders of the women in Whitechapel and Spitalfields. 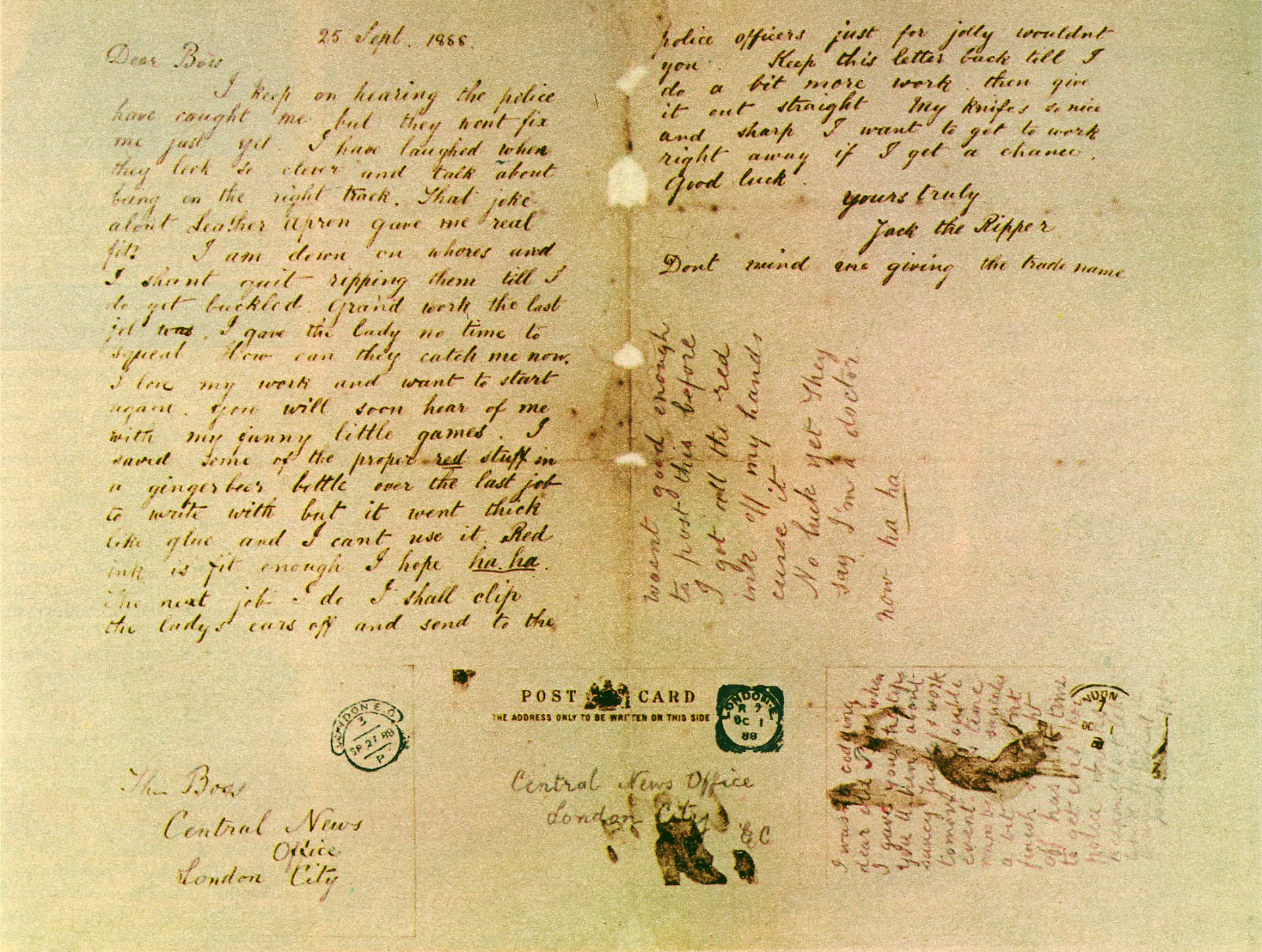 I keep on hearing the police have caught me but they wont fix me just yet. I have laughed when they look so clever and talk about being on the right track. That joke about Leather Apron gave me real fits. I am down on whores and I shant quit ripping them till I do get buckled. Grand work the last job was. I gave the lady no time to squeal. How can they catch me now. I love my work and want to start again. You will soon hear of me with my funny little games. I saved some of the proper red stuff in a ginger beer bottle over the last job to write with but it went thick like glue and I cant use it. Red ink is fit enough I hope ha. ha. The next job I do I shall clip the ladys ears off and send to the police officers just for jolly wouldn't you. Keep this letter back till I do a bit more work, then give it out straight. My knife's so nice and sharp I want to get to work right away if I get a chance. Good Luck.

At right angles to the main text was a small note written in red pencil:

PS Wasnt good enough to post this before I got all the red ink off my hands curse it No luck yet. They say I'm a doctor now. ha ha

The press agency openly suggested that it was probably a joke, but nonetheless passed it on to the Metropolitan Police for further examination two days later. Although it is not clear how the police reacted initially, they followed the author’s instructions and held the letter back until the murderer had done a ‘bit more work’ at which point (following the next murder) sections of the letter were reproduced in the press on 1st October. What caused the greatest impact, and indeed it is something that is still felt today, was the reproduction of the name ‘Jack the Ripper’, a perfect nickname for the as-yet-uncaught fiend of the East End.

Interestingly, this was not the first missive received by the authorities claiming to be written by the killer. Sir Charles Warren, Chief Commissioner of the Metropolitan Police, had been sent a rather rambling one a few days before but had given it no credence. It did not have a signature and was certainly not made public at the time, however the ‘Dear Boss’ letter, as it has become known, was guaranteed to cause a stir. But was it genuine?

Much has been written about this most infamous of communications, the first of many that would be received by all and sundry for a long time to come. But as the first to be published and the first one to bear that now infamous name, it has become iconic. Whether the general public felt it was genuine is hard to say, but many of the leading police officers of the day - the men who had direct responsibility for the investigation of 1888 - were asked what they felt about it years later, and the general consensus was that it was a hoax from the pen of ‘an enterprising London journalist.’

Such behaviour is not beyond the media of any era and one has to appreciate that these informed detectives would have had inside intelligence that may be long lost to us today. Dr Robert Anderson, head of CID in 1888 went on to say (in his memoirs of 1910) that he knew the name of the journalist who created it but shied from actually naming him publicly for fear of legal action. Others have suggested a plot by the staff of the Central News itself. Whatever the case, the concept of a cynical attempt to keep the momentum of the story buzzing to ensure high newspaper sales is not unreasonable.

The famous letter itself is now part of the collection of the National Archives in London (the former Public Record Office) where it shares archival space with over two-hundred other surviving letters allegedly from the murderer, sent from many places and written in many different styles. As much as these all have their curious appeal, it is the ‘Dear Boss’ letter which stands as an iconic artefact as it contains the first appearance of ‘Jack the Ripper’, which almost immediately eclipsed ‘Leather Apron’ as a name to conjure fear. The name, however, has now become a byword for terror and menace and is often (perhaps awkwardly) used to describe not only the murderer but everything associated with those terrible events of 1888 and beyond.