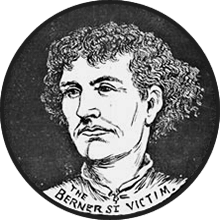 Elizabeth Stride was Jack the Ripper’s third victim and her death was the first of what later became known as the ‘Double Event’ – two murders which occurred just hours apart on the fateful night of 29th September 1888.

The Double Event occurred at a time when public panic and hysteria around the Ripper murders was mounting by the minute, and the discovery of two more murders in such a short space of time only served to add further fuel to the fire. Residents of the East End of London were scared to walk the streets alone after dark, and as the nights lengthened, the Autumn of Terror had the locals firmly within its grip.

Originally named Elisabeth Gustifson, it is thought that she must have had a chequered life in her native Sweden. By the age of just 21, she was already registered as a prostitute in Gothenburg. Following her mother’s death in the 1860s, Elizabeth used her inheritance money to travel to London, claiming alms from the Swedish Church then working in service in the West End.

Elizabeth married John Stride in 1869 and despite respectable jobs running coffee shops in Poplar with her husband, the marriage failed in 1881 and John died soon after that. From then on, Elizabeth went back to her old ways, working as a prostitute once again and living at 32 Flower and Dean Street, where she earned the nickname ‘Long Liz’. She also had a highly fractious relationship with a man named Michael Kidney, living with him on an on-off basis.

The Double Event Part One

On 29th September 1888, the last night of her life, Elizabeth Stride earned a small amount of money completing chores at the lodging-house in Flower and Dean Street. She then went to the Queen’s Head pub on Commercial Street where she spent some of her newly earned money. After leaving the pub, Elizabeth was purportedly seen several times over the next few hours in the company of different men.

On one occasion, she was seen sheltering from the rain with a man at the entrance to the Bricklayer’s Arms in Settles Street. The couple moved on quickly when two men entering the pub exclaimed, “that’s Leather Apron getting round you!” At this time, the “Dear Boss” letter had yet to be released, so the name ‘Jack the Ripper’ had not yet been adopted. It is recorded that William Smith, a police offer, also saw Elizabeth near Berner Street at about 12.30am.

However, the most notable sighting occurred at about 12.45am when a man named Israel Schwartz saw Elizabeth Stride apparently being assaulted at the entrance to a narrow gateway called Dutfield’s Yard. The man shouted an anti-Jewish insult – “Lipski!” – which scared Schwartz off and he was then followed down Berner Street by another man who had been lighting a pipe outside the Nelson Beer House.

Elizabeth Stride was found dead from a cut throat just over ten minutes later, laying inside the gateway where Schwartz had seen her. Her body was discovered by Louis Diemschutz, the steward of the International Working Men’s Educational Club, a Jewish anarchist club, just next door.

As Elizabeth’s cut throat was her only visible injury, some suggested that she wasn't actually a Jack the Ripper victim as her injuries did not match those of the previous Ripper victims. Instead, it was suggested that she was merely the unfortunate victim of a violent customer or local gang – perhaps the man that Schwartz had seen assaulting her. However, as the cut throat was perceived to be one of Jack the Ripper’s trademarks, it was more widely believed that Elizabeth was indeed a Ripper victim.

In addition, as the blood on the cobbles beneath her body had not yet dried or clotted, it was widely concluded at the time that Diemschutz’s arrival had interrupted the murderer in his work. It is also thought that the Ripper must have escaped with Diemschutz left the crime scene to raise the alarm.

Later on, after the murder had been reported, the police were plagued with various reports of potential information about Stride’s last hours, much of which turned out to be unreliable or even completely fabricated.

One woman, Mary Malcolm, claimed that Elizabeth was her sister, Elizabeth Watts, but this turned out to be false. It is thought that Malcolm invented the story simply to get a view of the body in the mortuary. Another misleading witness was Matthew Packer, a man who ran a small greengrocer shop a few doors down from Dutfield’s Yard. He claimed that, prior to her death, he had sold a bunch of grapes to a man who was accompanied by Stride. Unfortunately, Packer frequently changed his story and the timings under questioning, causing the police to regard him as an unreliable witness.

Out of all the known Jack the Ripper’s crimes, Elizabeth Stride’s murder caused the most debate. Did Schwartz see the real Ripper in action? Who was the man with the pipe; did Jack have an accomplice? Was Packer actually telling the truth? Were the sightings in Berner Street reliable, and do they give us an accurate picture of Elizabeth Stride’s last hours?

Despite all the confusion and uncertainty, what is certain is that just forty-five minutes after the discovery of Elizabeth Stride’s body in Dutfield’s Yard, another victim would be found…