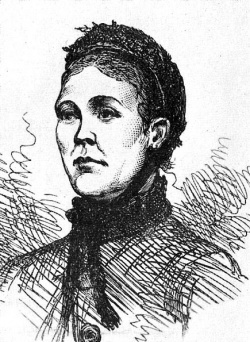 It is with great irony that Catherine Eddowes was released from Bishopsgate Police Station in the early hours of 30th September 1888, only to meet her grisly end at the hands of Jack the Ripper.

Mere hours before, she had been arrested in Aldgate High Street for being drunk and disorderly. As she was found within the boundary of the City of London, her arrest fell under the remit of the City Police. The City usually released their drunks from the cells once they had sobered up, which is what happened to Catherine Eddowes on 30th September.

Ironically, if she had been arrested a little over 100 yards away, she would have been in Metropolitan Police territory. If arrested here, she would have been taken to Leman Street and kept at the station until the morning. If this had been the case, it is likely that Catherine Eddowes would never have met Jack the Ripper.

Who Was Catherine Eddowes?

Born in 1842, Catherine Eddowes was originally from Wolverhampton, although she spent much of her life in Bermondsey. She had also been in a common-law marriage to Thomas Conway, a relationship which produced four children and one grandchild. However, the ‘marriage’ fell apart either due to Catherine’s excessive drinking or Thomas’ violent nature (the stories differ depending on which family was doing the talking) and she came to Spitalfields.

It is also unclear whether or not Catherine Eddowes was actually a prostitute. John Kelly, the partner she was living with at the time of her death, was adamant that she never earned a living in that way throughout their seven-year relationship.

The couple had been living together at 55 Flower and Dean Street throughout their relationship, but the last time Kelly saw Eddowes was during the afternoon of 29th September. She was penniless and said she was going to see her daughter to borrow some money. She never made the visit, however, she somehow made enough money later that day to drink enough to earn her a stay in the cells at Bishopsgate Police Station.

On the evening of 29th September, Eddowes had apparently been seen by three men prior to her death. She was seen talking to a man at one of the entrances to Mitre Square – only about ten minutes before her body was discovered.

Catherine Eddowes’ grossly mutilated body was discovered by PC Edward Watkins of the City Police at 1.44am. Her body was found lying in the darkest corner of Mitre Square, which at the time, was an isolated, poorly lit enclosure lined predominantly by tall warehouses.

Her throat had been cut to the spine, her abdomen was laid open, and portions of her intestines were found around her body. Her face had been delicately cut with various seemingly deliberate incisions, and most shockingly of all, her uterus and left kidney had been extracted and removed from the scene of the murder.

The ten-minute window between the sighting of Catherine Eddowes talking to the man and PC Watkins’ discovery of her body left Jack the Ripper with very little time to make his move. In just ten minutes, he would have had to intercept Eddowes, commit the extensive and complicated injuries, and make his getaway – all without being seen or overheard.

The murder was quick and silent and did not disturb any of the people who were in the buildings that surrounded Mitre Square.

In later years, the horrific yet precise injuries inflicted on Eddowes have sometimes been used as indicators to showcase Jack the Ripper’s supposed anatomical skill. However, this was not confirmed and is still up for debate today.

A number of medical experts were involved in the post-mortem examination of Catherine Eddowes body – namely Dr George Sequeira, Dr Frederick Gordon Brown, and Dr William Sedgewick Saunders. Unfortunately, the doctors all gave differing opinions with regards to the level of surgical and anatomical expertise demonstrated with the injuries, once again leading detectives to a dead end.

Notably, the murder of Catherine Eddowes also brought the City of London police into the Ripper investigation. While this may seem like a good thing, the reality is that it proved to be highly problematic.

During this period, the City and Metropolitan police forces had very little crossover. Even though it may seem silly today, the two forces remained largely within the confines of their borders, rather than working together to solve any crime. However, when Jack the Ripper killed Catherine Eddowes, all this was about to change.

Some suggest that the two forces found it hard to share information, or that the high-ranking officers rarely saw eye to eye. Whatever the reason, the reality was that the forces certainly had no authority outside of their own areas. Staggeringly, this situation would not be rectified until the Police Act of 1964.

This separation of authority would cause yet another controversy – this time directly linked to Eddowes’ murder in Mitre Square. The controversy was an issue then and still is one today, albeit, of course, amongst Ripperologists and other historians.

Jack the Ripper would make a rare mistake and leave a clue – the only confirmed clue throughout the entire investigation. This clue would draw attention to something else that would see the two forces briefly go head-to-head…