Was Jack the Ripper an American?

Jack the Ripper is the father of modern-day serial killers – the smiler with a knife who slaughtered five prostitutes then melted back into the London fog. In the 21st century, this may not seem like a lot, especially when you consider Ted Bundy, John Wayne Gacy or Peter Sutcliffe, all of whom got to five and continued killing. 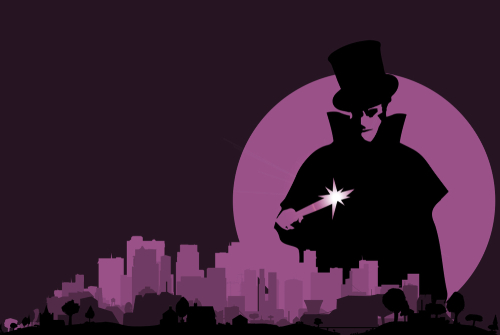 But in 1888, it was inconceivable that a man could kill that way, and the Ripper murders shook London cold. Rich and poor alike were horrified and secretly enthralled; gin-sodden prostitutes and Queen Victoria herself were united in their fascination with Jack the Ripper’s rampage.  Today, we are still mesmerised and puzzled. Why did his brief reign of terror come to a sudden and abrupt halt?

There have been many theories over the last 130 years which have attempted to uncover the secret identity of Jack the Ripper, but one of the most popular suggests that the killer could have been one of the many travelling Americans who came to England during the late 1880s. Arriving via the London docks, a visitor to Whitechapel could easily carry out his heinous crimes for a short while before finally returning back home.

This theory actually existed at the time of the murders and the following three men are just some of the Americans suspected of being Jack the Ripper.

Mansfield was an American actor, born on May 24th 1857. He had become a household name on the world stage and toured regularly around the states. He was hailed as one of the finest actors of his time. In 1887, Mansfield embarked on his most famous portrayal of a character by playing the lead role in Dr Jekyll and Mr Hyde. In fact, the act was so convincing that Mansfield would continue to play the role for a further 20 years.

In August 1888, Mansfield brought his new play to London and set up in the famous Lyceum Theatre in the West End. His performance was a hit and it was stated that his transformation into the monster Mr Hyde was so convincing that women in the audience fainted and grown men were scared to go home alone. By a strange coincidence, the opening of the play coincided with the start of the Jack the Ripper murders. A couple of days after the first show, the body of Martha Tabram was discovered in George Yard buildings, Whitechapel.

As the investigation unfolded, the police and the public came to the conclusion that the killer must a man who appeared perfectly normal during the day but “mentally” turned into a monster at night. The fact that the Ripper was also removing body parts from his victims suggested the work of a doctor. Obvious similarities were found between Dr Jekyll and Mr Hyde and the elusive Jack the Ripper, and it wasn’t long before a finger of suspicion was pointed at the one man who fitted this character perfectly – Richard Mansfield.

The fact that Mansfield was delivering positive proof of how a man could transform himself into a monster was enough to convince many people that this wasn’t just an act, but that it was a real transformation they were seeing. Another suspicious fact was that despite Mansfield playing regularly at the Lyceum, none of his performance dates clashed with the murder dates. Was this really just a coincidence?

On October 5th 1888, a concerned member of the public sent a letter to the City police claiming that Richard Mansfield was the Whitechapel Ripper. The writer emphasised that no man could portray a killer so convincingly without actually being a killer.

It is unknown whether the police took the letter or accusation seriously, or if they decided to go and interview Mansfield about his act. What is interesting is that there were no murders in October of 1888 – nobody knows why. Had the police interviewed or questioned the real killer and scared him off? If they did, it didn’t scare him off for long. In November, the Ripper struck for the final time with the murder of Mary Jane Kelly. Shortly after this murder, Richard Mansfield closed down his play and left London to return to the States. He died in 1907.

Another infamous American suspect was Doctor Francis J Tumblety. He was a quack doctor from New York who made his money selling dodgy Indian herbal remedies and tonics. He was a habitual liar with an obsessive sense of self-importance. It was reported that he had a deep hatred of women, especially prostitutes, and his movements could never be ascertained.

His arrival into London from the States heralded the start of the Whitechapel murders and he was arrested for acts of gross indecency and was almost certainly a suspect during the Ripper murders. During the Annie Chapman murder inquest, it was claimed that an American doctor had been seeking body parts for medical research. This led to the belief that the killer might be a medical man seeking to take the body parts for free. As both a doctor and an American, there is no doubt that Tumblety would have fallen under the radar of the investigating officers.

Shortly after Jack the Ripper’s final murder, in November 1888, Tumblety fled the country and moved back to America. It was rumoured that Scotland Yard went to the States in the hopes of interviewing this strange man, but unfortunately, all attempts to trace him drew a blank and Scotland Yard returned home empty-handed.

Tumblety was the prime suspect in the eyes of the Special branch and was even named a likely suspect by Inspector John G. Littlechild in a letter to the journalist George Simms.

In recent years, an American serial killer called H.H. Holmes has been put in the frame as a likely candidate to be Jack the Ripper. Dr H.H. Holmes is regarded as America’s first ever serial killer after he confessed to murdering over 20 people in his infamous Illinois “hotel” in the late 19th century. Holmes’ technique was to turn his hotel into a “murder castle” which was full of booby traps and torture devices where he would skin and dissect his victims. In fact, you could argue that H.H. Holmes was the inspiration behind the modern “SAW” movie franchise.

Although Holmes and Jack the Ripper appear to be very different kinds of killers, both were cold and calculating, almost methodical in their approach. There is also a similarity in the victims. The final Jack the Ripper victim, Mary Jane Kelly, was murdered and mutilated not in the street, but in her own home. This does show a very clear escalation in the Ripper’s MO. He had turned from a street killer into a man who took his victims behind closed doors. If H.H. Holmes was the Ripper, the murder of Mary Kelly may have inspired him to take the next step and create his murder castle in Chicago where he could continue his gruesome work uninterrupted.

In 2018, the great-grandson of Holmes uncovered circumstantial evidence which could link his relative to the Jack the Ripper letters and it’s possible that Holmes may have been in London at the right time to be the Whitechapel Ripper. If this is true, then it puts Holmes in a likely position to be Jack the Ripper.

Perhaps one of the three men we have mentioned here today could have been the Ripper and if so, then it explains why the killings started and stopped so suddenly and why nobody was arrested for the crimes.