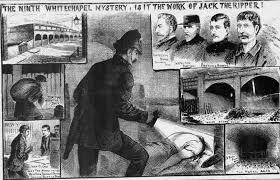 Perhaps one of the most curious incidents during the period of the Whitechapel murders of 1888-91 was the grisly discovery of a woman’s headless torso under a railway arch in Pinchin Street, Whitechapel, in the early morning of 10th September 1889. PC William Pennett discovered the torso at 5.15 am when he was aware of an unpleasant smell emanating from the arch, which lay close to Backchurch Lane. The body, missing head and legs, had already begun to decompose and was found wrapped in an old chemise. Apart from the missing limbs, the abdominal area had been badly mutilated and it was believed the woman had been killed more than 24 hours previously.

The press were keen to speculate that the abdominal mutilations bore shades of Jack the Ripper and it was also said that the uterus of the woman was missing, making it very tempting to link this awful crime with the Whitechapel murderer, particularly as it was discovered in the Ripper’s hunting ground. However, Sir Melville Macnaghten, Chief Constable of the Metropolitan Police at that time, noted that “the head and legs had been severed in a manner identical with that of the woman whose remains were discovered in the Thames, in Battersea Park, and on the Chelsea Embankment on 4th June of the same year.”

Macnaghten was referring to a series of other murder mysteries known today as the Thames Torso Murders, where over a several year period, various pieces of women were found in locations close to the River, or indeed, floating in it. One discovery was made in the foundation works of the New Scotland Yard building in Whitehall, which was then under construction. Other remains were found at Rainham and Macnaghten was of the belief that the Pinchin Street case bore unquestionable similarities with this series of unsolved crimes. It seems that the police were very cautious about suggesting that the Pinchin Street discovery had anything to do with the Ripper.

But like the Whitechapel murders and the Thames Torsos, the perpetrator of these grisly deeds was never found.

Three men, who were found to be sleeping rough in an adjacent archway, were brought in for questioning but released when they were able to give a satisfactory account of themselves and their reasons for being there. And the mystery of the identity of the dead woman herself remained unanswered: apparently, the hands showed no signs of manual labour and sadly these were the only clues the police could muster, for there were no other distinguishing features from which a positive ID could be made. For a brief time, the woman was believed to be a lady called Lydia Hart, a prostitute who had apparently been missing for some time, however, she was soon located, apparently recovering in a hospital after “a bit of a spree.” Suggestions that the body was that of another missing girl, Emily Barker, came to nothing.

Although it is very unlikely that the Pinchin Street Torso had anything to do with Jack the Ripper, it remains yet another murder mystery discovered in the East End during that terrible period and thus it sits on the full list of Whitechapel Murders of 1888 to 1891, as they were perceived at that time.