Unlike the strange case of Annie Farmer in November 1888, which did not result in a death, the odd case of Rose Mylett the following December made it into Scotland Yard’s Whitechapel Murders list. Whether it was ‘murder by person or persons unknown’ has always been debatable. Catherine ‘Rose’ Mylett was 29 years old when she died in Clarke’s Yard in Poplar on 20th December 1888, the location being ill-lit and considered a relatively dangerous neighbourhood. The last time Mylett was seen alive was between 1.45 and 2.30am walking past The George pub in Commercial Road. The witness, Alice Graves, said that Mylett was visibly drunk (she was often intoxicated, earning her the nickname ‘Drunk Lizzie Davis’) and accompanied by two men. 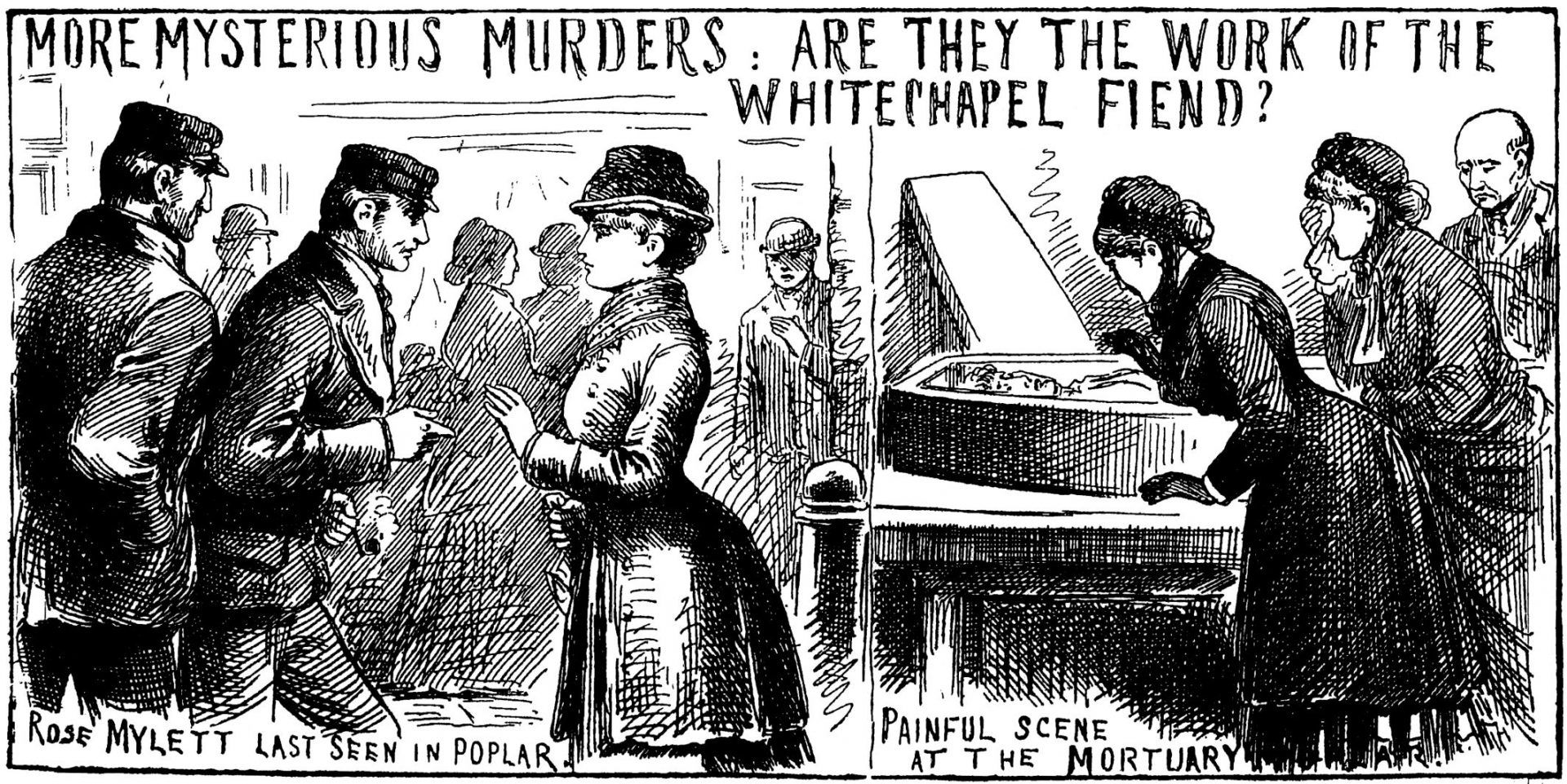 At 4.15am, her body was found in the darkness of Clarke’s Yard by Sergeant Robert Golding, who immediately recognised her as one of the local prostitutes. She was lying on her left side, her left cheek on the ground, her left arm underneath her and her left leg was slightly drawn up. A little blood could be seen trickling from her nostrils. Importantly, there were no signs of mutilation or any other injury, Mylett’s clothes were not disarranged and the presence of money in her dress pocket suggested that robbery had not been a motive in any attack on her by a third party. In fact, it appeared on examination of the area surrounding the body, that a struggle had not taken place.

A small clue was noticed in the mortuary when a mark around the neck was discovered by a mortuary keeper which appeared to have been made by a cord of some type. Further examination of the body during the post-mortem strongly pointed to death by strangulation in the opinion of Dr Matthew Brownfield. However, the police opinion was that she had died of natural causes, a bizarre conclusion considering Dr Brownfield’s evidence. Even more embarrassing was the suggestion that the Ripper may have been responsible. In fact, one newspaper made the unsubstantiated claim that Dr George Bagster Phillips was of the opinion that he saw the same hand at work as that of the murder of Annie Chapman the previous September. In fact, professional opinion regarding Mylett’s death saw the authorities in disarray.

The problem, it seems, was a breakdown in communication. The police had not found any sign of violence on Mylett’s body or any sign of a struggle in Clarke’s Yard when they conducted the initial examination of the scene, and thus foul play was not suspected. But when an inspector spoke to Dr Brownfield, the medical man’s opinion that murder had taken place was not communicated further and thus the natural causes conclusion was still ‘in the system’. When Brownfield’s opinion that murder was the cause of death and that the Ripper’s involvement was suggested at the public inquest, the police found themselves in an embarrassing situation.

Dr Thomas Bond was instructed by Assistant Commissioner Robert Anderson to make his own examination and his conclusions did little to assist in the controversy: Bond felt that strangulation had been the cause of death, but astonishingly, that Mylett had fallen down while drunk and had compressed her larynx against the neck of her jacket, and that the mark described as the mark of a cord must have been produced by the rim of the collar of her jacket. A presumably confused and frustrated inquest jury nonetheless returned the verdict of ‘wilful murder’ which again put the opinions of some of the top Scotland Yard men on a very uneven footing. It almost felt that the police, painted into a corner, had done everything they could to push for a verdict of accidental death.

The case of Rose Mylett remains a tricky one. Where it was highly unlikely that Jack the Ripper was responsible for this homicide (if it indeed was a homicide), it did demonstrate, as in the case of Annie Farmer the previous month, that the Ripper would remain a convenient scapegoat for the deaths of prostitutes for some time to come. Indeed, another murder the following year would certainly see one distinguished surgeon put the blame squarely in the hands of Jack the Ripper.