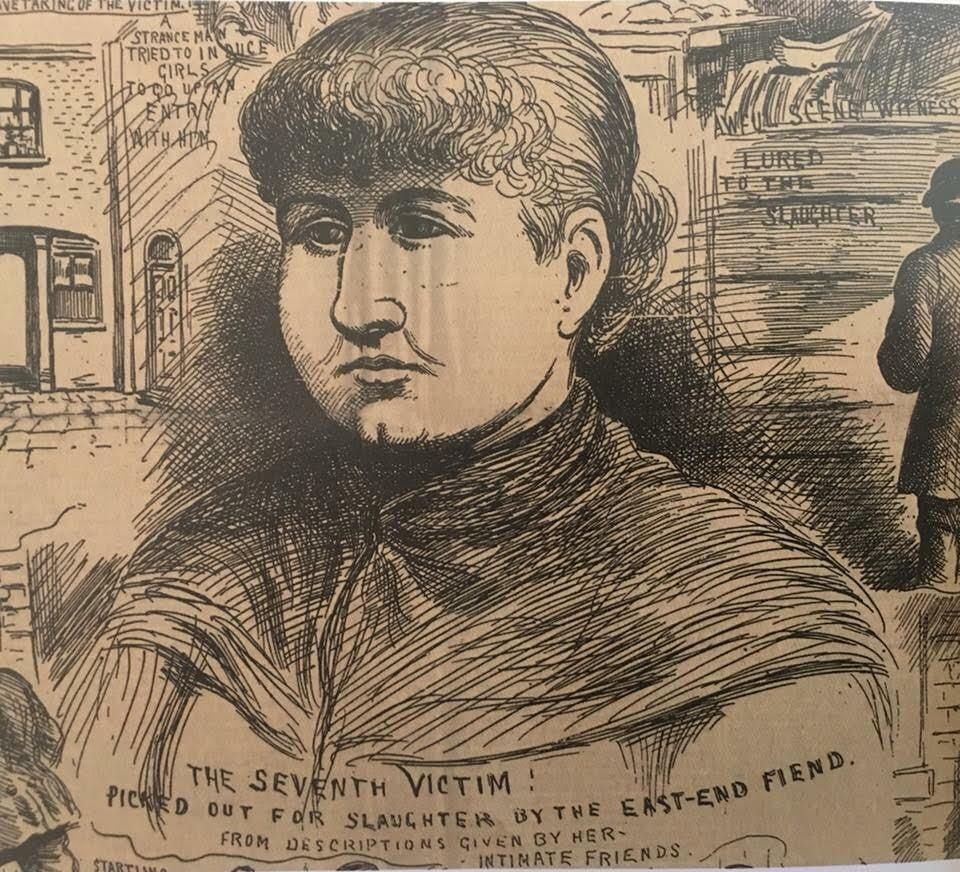 Mary Jane Kelly was widely considered to be the last of the Canonical Five Jack the Ripper victims, and largely due to the brutally horrific nature of her murder, she has undoubtedly become the most famous victim of them all.

Perhaps it is ironic, then, that very little knowledge we have of her past life has actually been confirmed to be true. Much of what we know about Mary today came from the woman herself and was then recounted after her death on 9th November 1888 in Miller’s Court, Dorset Street.

Story has it that Mary Jane Kelly was born in Limerick, Ireland, and after her family moved to Wales, she married at the tender age of sixteen to a man named Davies. However, she was widowed just a few years later when her husband was killed during a mining explosion.

Mary Jane Kelly then moved to Cardiff where she allegedly fell into the world of prostitution and is believed to have spent time with a well-to-do gentleman in the London area. Around this time, she accompanied the gentleman to Paris, although she was not too fond of the city. She also acquired the alternative name of ‘Marie Jeanette’ and reportedly lived the life of a lady.

It is said that Mary arrived in the East End of London circa 1883-1884, first lodging in Breezer’s Hill in St George-in-the-East and, by 1886, in Thrawl Street, Spitalfields.

Mary met Joseph Barnett, a costermonger, on Good Friday 1887. The pair got on well enough to live as a couple thereafter, taking up lodgings in dosshouses in George Street, Little Paternoster Row, and later, Brick Lane. By March 1888, the couple were living at 13 Miller’s Court, Dorset Street, a small, partly furnished room. The lodgings were owned by landlord John McCarthy and rented out for the weekly sum of four shillings and sixpence.

In the late summer of 1888, the couple’s relatively stable life was interrupted when Barnett lost his job. As a result, Mary took to the streets once again to earn a living – a situation that, unsurprisingly, Barnett disapproved of. As a result, life became difficult for the pair from this point, with arguments growing more frequent and violent - particularly when Mary had been drinking.

On one occasion, she had thrown something at Barnett which had missed him and crashed through the windows of their room. Not long after this incident, Barnett moved out and took lodgings elsewhere. Despite the separation, the pair remained on reasonably good terms and Barnett would help Mary out financially when he could. However, this was not enough to keep her off the streets or ensure she stayed up to date with her rent.

On the evening of 8th November 1888, Joseph would visit Mary for the last time.

An unconfirmed story claimed that Mary Jane Kelly was seen on the evening of 8th November, drinking with Elizabeth Foster in the Ten Bells pub. Another report stated that Mary was seen with a man in the Britannia, by which time she appeared to be very drunk.

Two important sightings then occurred. The first took place at 11.45pm, when Mary Ann Cox, of 5 Miller’s Court, saw Mary – worse for the drink – going into her room with an unidentified blotchy-faced man who carried a pot of beer. Once in her room, Mary began to sing and continued to do so for quite some time, to the point where Catherine Pickett, another Miller’s Court resident, was tempted to go and complain before her husband dissuaded her from doing so.

At 2 am on the morning of 9th November, the second important sighting occurred. George Hutchinson, who knew Mary, met her out on Commercial Street. She asked him for money, but as he had none to give, she bid him farewell and continued on her way. She was then approached by an unusually well-dressed man, just by the entrance to Thrawl Street, who put his hand on her shoulder before the pair burst out laughing.

Still lurking in the shadows, Hutchinson followed the couple up Commercial Street into Dorset Street and watched from the opposite side of Miller’s Court as they entered and went into Mary’s room. He remained outside, watching, for approximately 45 minutes but as he saw no one leave, he then headed off to find lodgings.

At approximately 4 am, less than two hours later, two residents of Miller’s Court heard the cry of “Murder!” but chose to ignore it as shouts of this nature were rather common occurrences in Dorset Street.

Bowyer knocked on the door of Mary’s room, but receiving no reply, he decided to go around to the windows. Noticing the broken pane of glass, he then put his hand inside to pull aside the curtain. Peering into the gloom of the room, Bowyer saw the body of Mary Jane Kelly lying on the bed in the most appalling condition, literally ripped and hacked to pieces.

“The whole of the surface of the abdomen and thighs was removed and the abdominal cavity emptied of its viscera. The breasts were cut off, the arms mutilated by several jagged wounds and the face hacked beyond recognition of the features. The tissues of the neck were severed all round down to the bone.

The viscera were found in various parts viz: the uterus and kidneys with one breast under the head, the other breast by the right foot, the liver between the feet, the intestines by the right side and the spleen by the left side of the body. The flaps removed from the abdomen and thighs were on a table...The pericardium was open below and the heart absent.”

The Final Jack the Ripper Victim?

Mary Jane Kelly’s murder was unique because crime scene photographs were taken; this was the only Ripper murder where the lengthy process of photography – as it existed at the time – was practical. The two images that survive to this day (if indeed there were more) are a testament to the sheer carnage that doctors and the police faced as they forced entry into the room later that day.

In hindsight, it was the absolute horror of this murder that led many to judge Mary Jane Kelly’s murder as the final atrocity. Whether the Ripper had finally satiated his thirst for violence or, in the words of Sir Melville Macnaghten, “that the murderer's brain gave way altogether after his awful glut...and that he immediately committed suicide, or, as a possible alternative, was found to be so hopelessly mad by his relations, that he was by them confined in some asylum...”

News of Mary Jane Kelly’s murder spread quickly, with the public panic and outrage disrupting even the Lord Mayor’s Show which was taking place in the City at the time. Mary’s funeral took place on 19th November at St Patrick’s Roman Catholic Cemetery in Leytonstone. Few official attendees were present – including no family members – but there was a colossal outpouring of grief from the public, with huge, respectful crowds lining the procession route through the East End.

Even today, the concept of Mary Jane Kelly as the young life cut tragically short (she was the youngest Ripper victim at just 25 years old) has helped to maintain a public fascination in the case that still remains today.

Many people are convinced that Jack the Ripper’s reign of terror ended with the awful murder of Mary Jane Kelly on 9th November 1888, but we must be aware that as the weeks, months, and even years passed, and the Ripper remained uncaught, the very real threat of another murder was always in the air.

Thus, there are a number of later crimes in the East End which have sometimes been attributed to Jack the Ripper, too - instigating Ripper scares and keeping researchers and historians engaged in debate over their validity ever since!