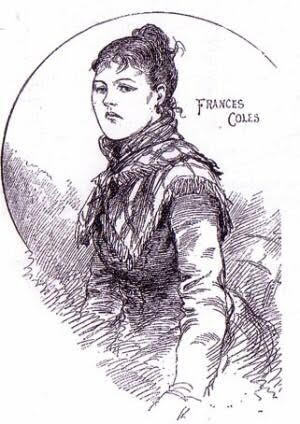 On 13th February 1891, Frances Coles, a 32-year-old prostitute was found close to death under a grimy dark railway arch (with the curiously pretty name of Swallow Gardens) between Royal Mint Street and Chamber Street in Whitechapel. Her throat had been cut. PC Ernest Thompson, a newly appointed constable, made the discovery on what was the first solo beat of his police career and just before finding Coles, had heard the sound of somebody running away from the scene. Looking at the body before him, Thompson believed he saw her eye move, suggesting she was still alive and it is now believed that she died on the stretcher on her way to the London Hospital.

Frances Coles, from Bermondsey, is believed to have worked as a prostitute in the East End for some eight years, but like many women, this did not stop her striking up more durable relationships. At the time of her death, Coles was with James Sadler, a ship’s fireman whom she had known on and off for some years, a rather gruff, often violent man who frequently indulged in excessively drinking. The night before her death the couple had been on a formidable pub crawl and had become drunk and emotional. In Thrawl Street, Sadler was set upon and robbed, and the fact that Coles never came to his assistance led them to argue, after which they went to their lodgings in White’s Row. After a short while, Sadler left.

From then on, after being refused admittance to his ship, the SS Fez, Sadler found himself in a number of drink-fuelled altercations in the area around Royal Mint Street and the docks, one of which led to minor medical treatment and a short stay in the London Hospital. He was also robbed a second time that night along the Highway in Wapping. Later, he was seen in a doss-house selling a knife to a fellow lodger, and this became one of several reasons to arrest him on suspicion of Coles’ murder. There was also briefly the suggestion that he may have been Jack the Ripper, however, investigations made unto his whereabouts in 1888 put him at sea on the relevant dates, but he still remained suspect number one for the killing of Frances Coles. He was charged on 16th February.

With excellent representation from the Seaman’s Union and the lack of any concrete evidence linking him to the murder, James Sadler was later acquitted of the crime. Also, the knife he had sold was apparently incapable of inflicting Coles’ wounds and it was believed that in his then incredibly intoxicated condition, Sadler would have been incapable of efficiently inflicting them.

Two interesting developments came from this incident. First, a sample of Coles’ blood was taken in the hope that at some future date, some new form of forensic analysis could produce some answers. Unfortunately, human blood types were not discovered until 1900, and so this proved to be fruitless and the sample was never used.

Secondly, PC Thompson, when discovering the body, was forbidden by policing rules to leave the body until help had arrived, and thus was unable to follow the footstep he had heard leaving the scene; his belief that he may have let Jack the Ripper run free would haunt him for the rest of his short life and in 1900 he received fatal stab wounds from a man named Abraham Barnett after breaking up an altercation on Commercial Road.