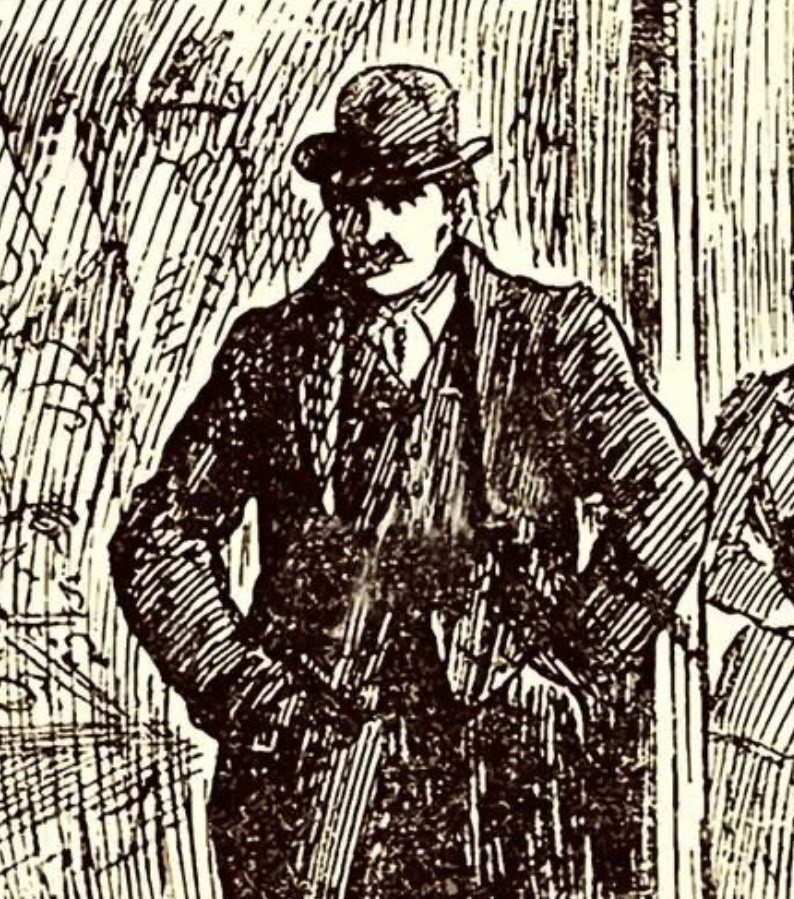 George Hutchinson is a rather mysterious figure in the field of Ripperology. As a suspect, there is little major or forensic evidence which incriminates him – most of the reasoning is simply conjecture. Here we are going to explore everything we know about this unusual figure who faded into obscurity, yet supposedly got closer to the Ripper than anyone.

Who Was George Hutchinson?

We don’t know much about Hutchinson’s early life. No records of his birth were ever discovered and the only suggestion of his birthplace came years later from a Reginald Hutchinson, who claimed to by George’s son. Reginald told his interviewer that George was born on 1st October 1866, making him 22 during the times of the murders which is plausible based on what we do know about the man. However, over the years, it has generally been decided that Reginald’s father was likely a different George Hutchinson and, in turn, this information has been dismissed and we remain in the dark about this suspect’s history.

What we do know about the man is that he was a 22-33-year-old (varying depending on sources) local man who lived and worked in London. He lived at the Victoria Home for Working Men which was situated on Commercial Street and within touching distance of some key Jack the Ripper murder locations. The newspapers from the time are one of the only sources of information regarding Hutchinson’s occupation and appearance. Describing him as an unemployed labourer, George was supposedly short and stout with some kind of military background depending on the newspaper being read.

Regardless, it wasn’t any of his physical traits or history which thrust him into the limelight, it was his involvement as a witness in the last of the Five Canonical Murders – the death of Mary Kelly.

When Did he Enter the Spotlight?

George Hutchinson first entered the public eye when he came forward after the death of Mary Kelly, offering a witness statement to the police related to Jack the Ripper. This occurred three days after the murder which, once you hear his statement, definitely raises some questions. Fortunately, Hutchinson’s entire police statement remains intact so we can reference it directly.

Hutchinson claimed that he had seen Mary Kelly, the victim, on the night of her death, 9th November 1888. He said that he was actually friends with the victim, having known her for three years, and bumped into her on Commercial Street at around 2am after finding that he no longer had a bed available at his home. She requested a sixpence from him, which he claimed he didn’t have, to which she bid him good morning and continued on her way.

George told the police that after parting ways, he turned to see her get stopped by a man coming in the opposite direction. Supposedly, the man said something to Kelly which Hutchinson couldn’t hear and then they laughed. Afterwards, Kelly said “Alright,” and the man responded with “you will be alright for what I have told you,” before they turned around to walk back down the street, back towards Hutchinson.

George claimed that he was intrigued by the man as he appeared wealthy and so stood against a lamp in front of the Queen’s House pub and waited for them to pass. As they passed, Hutchinson’s statement says that the man pulled his hat down to try and cover his face but Hutchinson stooped to ensure he could see him clearly.

Hutchinson claimed that the man was between 34 and 35 years of age, 5 feet and 6 inches tall with a small moustache which curled upwards at the edges and dark hair. He also specified that the man’s eyelashes and eyes were dark in colour, though he had a pale complexion. Beyond this, he wore a long, collared coat which was dark in colour but featured astrakhan cuffs; it was this trait which defined the man’s title of ‘The Astrakhan Man’ in Ripperology circles. Additionally, in this single glance, Hutchinson also noticed that the man was wearing boots and gaiters with white buttons, alongside a thick gold chain around his neck and a black tie with a horseshoe pin attached to it. He also identified that the man was holding a small parcel in his left hand with a strap around it.

All in all, a highly detailed description.

After the pair walked past him, Hutchinson claimed that he tried to follow them, heading towards the Miller’s Court, where Kelly lived and was found brutally murdered the next day. George elaborated, claiming he saw them stand and talk at the entrance to the courtyard, during which time he heard specifics of their conversation, saw them kiss and described how Kelly claimed she had lost her handkerchief, to which the man handed her a red handkerchief of his own.

Afterwards, Hutchinson waited in Miller’s Court to see if they would leave Kelly’s home. He waited for 45 minutes before departing, which is the only part of the statement corroborated by another eyewitness, Sarah Lewis, who claimed to see a man standing opposite Miller’s Court at this time. This concluded his statement.

A highly detailed series of events which the police wholeheartedly believed. In fact, the principal investigator of the Jack the Ripper case, Frederick Abberline, was reported to have said that he wholeheartedly believed Hutchinson’s statement. Abberline even took Hutchinson victim-spotting through the area, particularly as George has specified in his statement that he could identify the man he saw.

Nothing came to fruition from this information and the Ripper continued to elude the police whilst Hutchinson faded out of the public eye and into obscurity. After his witness testimony, there are no records of what happened next for George. There are no death certificates or records showing his actions – he simply disappeared from the historical map. Yet, as time passed and the evidence was reviewed, again and again, his name eventually arose as a potential suspect.

Why is he Considered as a Suspect?

At first glance, Hutchinson’s eye-witness account and statement are simply valuable pieces of information that the police could use. However, as we continue to analyse what happened in 1888, questions arise relating to what he said and how accurate the account is or even, whether he was covering up his own tracks.

The first issue that came into question was the sheer detail of the testimony. Hutchinson claimed to have heard specific parts of the conversation between Mary Kelly and The Astrakhan Man, despite having to keep a distance to not arouse suspicion. Furthermore, he managed to identify and memorise every aspect of the man’s outfit, complexion and appearance, including the colour of his eyelashes and buttons on his boots. This unusual detail is further compounded by the fact that Hutchinson managed to see the colour of the handkerchief that the man handed Mary Kelly outside her home, despite the lack of street lights at the time and the relatively large distance away he must have been to follow without being seen.

Beyond the unprecedented detail of the statement, Hutchinson also made contradictions in the media when he was interviewed about the murder by newspapers. In one case, he told a newspaper that he had stood outside Mary Kelly’s window on the night when he told the police that he simply stood at the entrance of the court.

Finally, Hutchinson claimed to be friends with Mary Kelly, having known her for three years. In that case, after hearing about her being killed in one of the most brutal murders London has ever seen, why would he wait three days before going to the police?

One theory suggests that Hutchinson was, himself, Jack the Ripper. He may have been content remaining under the radar but, upon hearing that Sarah Lewis had identified a man hanging around Miller’s Court at the time of death, he would have known that, eventually, the police would come. Therefore, he concocted a story and pre-empted their investigation of him by providing a detailed witness testimony that they simply couldn’t ignore. Though, this is all conjecture.

Alternatively, Hutchinson could have been telling the truth, or simply have embellished the truth which led to the inconsistencies in his story and its surprising detail. He could have done this for monetary reasons, as the police paid him a full month’s wages for his assistance with the investigation and the newspapers also paid for his statement. A large injection of cash for someone who had lived in a poor area all their life.

But Was George Hutchinson Jack the Ripper?

Despite all of this information and the theories surrounding Hutchinson’s involvement, no one can truly say whether he was the Ripper or not. On our Jack the Ripper Tour, we focus on providing attendees with all the information so that they can form theories of their own.

If you want to learn more about the history behind the most legendary serial killer in the world, book onto our Jack the Ripper tour today and explore the locations where the murders took place.